Wife to James Whelan by Teresa Deevy and directed by Jim Nolan runs in Garter Lane Theatre, in association with WIT, 11-19 November 2016

Wife to James Whelan by Teresa Deevy is the culmination of months of work with WIT students of architecture, theatre studies, design, and music under the expert eye of director Jim Nolan and his theatre residency at Garter Lane Arts Centre, funded by the Arts Council and Waterford City & County Council.

The poster was designed by Design student Nathan Burke, and two third year Theatre Studies students are involved: Natasha Everitt and Anita O'Keeffe. As well as these students, the set was designed by studen Ian Tan while the sound design was taken care of by Niamh Hourigan. Also John Maloney (WIT Library) is performing.

Teresa Deevy was born in Waterford in 1894 and lived for much of her life at the family home on Passage Road in the city. In 1913 she was a student at UCD when she contracted Meniere's disease and lost her hearing. She went to London in 1914 to learn lip-reading and here discovered her interest in drama. In March, 1930, the Abbey Theatre staged her play, Reapers, followed in the course of the next six years by A Disciple, Temporal Powers, The King of Spain's Daughter, Katie Roche and The Wild Goose. Championed by her fellow playwright and then Manager of the Abbey, Lennox Robinson, Deevy fell out of favour with Robinson's successor, Ernest Blythe, and in 1942, Wife to James Whelan was rejected by Blythe, effectively ending her career as an Abbey playwright. Wife to James Whelan was subsequently broadcast on radio by BBC in 1946 and by Radio Eireann in 1947. In October 1956, the play received its stage première at the Studio Theatre, Dublin and was revived by the Mint Theatre, New York, in July, 2010. Teresa Deevy died in Waterford, aged 68, on January 19th, 1963.

According to Lecturer in Theatre Studies at WIT Kate McCarthy, "this production builds on the significant work started in 2014, when we were also majorly involved in the production of Blackwater Angel by Jim Nolan, and we are proud that so many of the students have been encouraged by their WIT lecturers to take part again in what will be a wonderful production of a play by a previously neglected Waterford playwright."

Director, Jim Nolan said that he was particularly pleased to be directing the first Waterford production of a work by a fellow Waterford playwright: “I have been an admirer of Teresa Deevy’s plays since the early days of Red Kettle when we presented her one–act play, The King of Spain’s Daughter. In the early ‘90s, I tried to produce Katie Roche but at the time the rights to this were held by the Abbey Theatre. I have often regretted not turning then to some of the lesser known plays in Teresa’s catalogue but everything comes to those who wait and it will be a real pleasure to bring Wife to James Whelan to the Irish stage for the first time in sixty years.”

It's the summer of 1930 in the town of Kilbeggan, as a group of young friends gather to see off the ambitious and mercurial James Whelan who is leaving to take up a position in Dublin. James pledges to return and marry his childhood sweetheart, Nan Bowers, but the spirited Nan resents James' leave taking and is making no promises to wait for him. Seven years later, James is back in town, about to open the Silver Wings Motor Services and in the market for a wife. But when Nan - by now a near destitute widow with a young son - comes looking for work, events take an unexpected and tragic turn. Wife to James Whelan is a telling commentary on the power structures of small town 1930's Ireland and a bitter-sweet evocation of the often painful distance between what is felt and what is said. 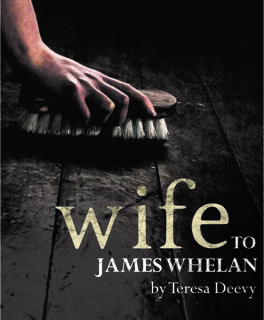