WIT students tuning in to homelessness at Christmas

The Christmas spirit is alive and well in Waterford Institute of Technology where students and staff of the Department of Creative and Performing Arts are running their annual Christmas Concert on Thursday, 5 December at 7pm. The venue will be the magnificent chapel on the College Street Campus, on The Manor in Waterford City.

The music degree course at WIT is renowned for exceptional levels of talent and musicianship among both students and staff, with a variety of soloists and ensembles comprising of both taking to the stage for this event. Music on the night will range from traditional Irish to Gypsy Jazz and classical favourites to choral masterpieces. Also performing on the night will be the wonderful WIT Orchestra. To paraphrase the late, great Gay Byrne, “There’ll be something for everyone in the audience”.

Entry to the event is free, but donations will be taken on the night for FOCUS Ireland. According to Cathryn O’Leary from FOCUS Ireland “The Christmas Concert at WIT has become a really important part of FOCUS Ireland’s Christmas Calendar”. Founded in 1985, Focus Ireland carries out essential work for the homeless throughout Ireland. They work with not only people who are without a home, but with those in risk of losing their home. They provide advice and information, advocacy and help to find homes for those in need. A very worthwhile cause at any time of year, but particularly at Christmas.

Not content with organizing and performing at the fundraising Christmas Concert, some of the BA Music students have decided to take part in the annual Big Deise Sleep Out at the Edmund Rice Centre the night after the concert, to lend further support to FOCUS Ireland. According to Rian Carty, 2nd Year BA Music student, the reason for doing this is ”There’s a lot of homelessness at the moment, you can see tents around the city. I’m sleeping out to get an understanding of how hard it is for people who are homeless at this time of year”.

Sometimes students can find themselves in the news for the wrong reasons, creating disturbances and over doing their socialising, but at 7pm on 5 December in The Chapel on WIT’s College Street Campus there will be nothing but good vibes and positivity to report from the BA Music students who will be playing their hearts out for the audience present and for a very worthy cause. They’d be delighted if you could join them to make a wonderful night even more special. 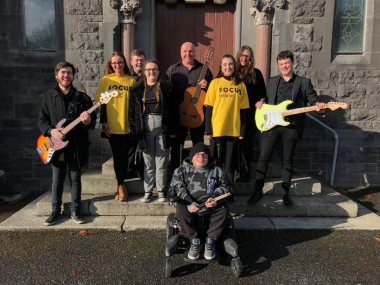