WIT Youth Choir first to win ‘Choir of the Year’

With a mark of 92%, the 40-strong choir which are part of the Music School’s Choral Programme were described as ‘simply brilliant and very moving’

The WIT Youth Choir have been crowned ‘National Choir of the Year’ at the Navan Choral Festival.

WIT are the first youth choir ever to win the title in the competition, which is the finale of the festival which had over 3,000 competitors.

The young singers staved off adult groups from across Ireland as well as a visiting choir from Alma College in Michigan to win the title and they were ecstatic with the result.

Winning with a mark of 92%, adjudicator Shane Brennan described them as ‘simply brilliant and very moving’.

The 40-strong choir is the senior group of the Music School’s Choral Programme and is considered one of the top youth choirs in the country. Made up of talented young singers from throughout the South-East, they have previously performed in Poland, Belgium and the Czech Republic and in July they travel to Slovakia to compete in Bratislava’s International Youth Music Festival.

The choir is conducted and accompanied by Music School lecturers Niall Crowley and Sinéad Crowley.

And there was more good news for our Youth Choir! Their performance of 'Shenadoah' at last year's Cork Choral Festival was selected as one of the highlights of the event. The featured tracks were selected from the hundreds of performaces throughout the festival and include choirs from Slovenia, Germany, Poland, Estonia and Ireland.

To listen to the piece go to: Soundcloud.

For more information on the WIT Choral Programme visit www.wit.ie/choirs. 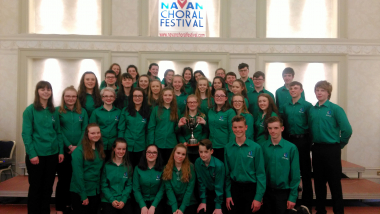