Following an already successful year, the WIT Youth Choir and conductor Niall Crowley, were given a unique invitation to perform at Carnegie Hall

It has been an unforgettable 12 months for the WIT Youth Choir. Back in May they became the first ever youth choir to win the ‘National Choir of the Year’ at the Navan Choral Festival; they then claimed a Gold Prize from the International Youth Music Festival in Bratislava in July. However, they recently surpassed even these achievements by performing in the world-renowned music venue, Carnegie Hall, New York.

Conductor and lecturer in the BA (Hons) Music at WIT,  Niall Crowley spoke about how the unique invitation came about, “the group has been singing incredibly well these past few years. Perhaps because of this we were contacted by a visiting choir from New Jersey who wanted to share a concert with us here in Waterford. We seemingly impressed because an invitation came soon after to visit New Jersey along with an invitation to perform in Carnegie Hall.”

And so, the WIT Youth Choir were selected as international guests to take part in a unique invitational concert. This featured eight of the best youth and university choirs from across the East coast of America, and took place in the main auditorium of Carnegie Hall with all 3,000 seats sold out.

Although a young group, the significance of the trip and the performance wasn’t lost on the members themselves. Hannah Jacob, 17, was one of the 46 young singers who travelled, “to sing on stage in Carnegie Hall was an absolute dream come true. I never thought I would get to see Carnegie Hall let alone perform there and it was such a privilege to be able to sing on a stage that hosted some of the world’s greatest musicians. To be the only visiting choir and to represent Ireland was a great honour and through the guidance of our teachers I really felt we made not only them proud but we made ourselves and our country proud also!”

“Ellen Glynn, who is just 15, also felt that the trip was something she will never forget, “the trip to New York was an amazing experience for all members of the Youth Choir. We got the opportunity to see the famous Statue of Liberty, 9/11 Memorial, Brooklyn Bridge and Times Square. However, the most exciting and surreal part of our trip was singing on the stage of Carnegie Hall. I cannot begin to describe this incredible experience. Joy, exhilaration and pride were among the myriad of feelings that I felt while standing on the stage that so many famous performers have graced. It is an experience that I will never forget and a memory that I will cherish and treasure forever.”

Conductor Niall Crowley went on to say, “I couldn’t be happier with how it all went.  I’m incredibly proud of the choir – on so many levels, they really were amazing!” 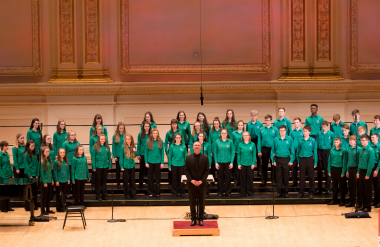