Ireland and the South East will benefit from a new research project which will boost regional economic development, job creation, new enterprise start-ups, and the commercialisation of research as well as support the long term sustainability of the region.

Waterford Institute of Technology (WIT), together with 14 partners, has been awarded €2.8 million to lead the project known as eDigiregion which aims to develop smart specialisation Regional Innovation Systems (RIS).

According to Prof. Bill O’Gorman, Project Director, “eDIGIREGION, through a series of cross-border transnational collaborations and internationalisation activities in the technology domains of the EU Digital Agenda, will support open innovation, boost regional competitiveness, and unlock new national and international business opportunities for SMEs.

“A particularly unique aspect of the eDIGIREGION project is its intention to push ‘live’ research through the pipelines created by the Joint Action Plans in the four partner regions by facilitating regional actors (researchers, SMEs, government agencies and funding agencies) to bring technology through the innovation process, from research to innovation to commercialisation.”

eDigiregion, which is funded under the European Framework (FP7), consists of four high-potential research-driven clusters in diverse European regions including the South East of Ireland; Central Hungary; Castilla-La Mancha in Spain; and Bucharest-Ilfov in Romania.

The project will bring together regional stakeholders such as local/regional government, universities/institutes of technology, research centres, government enterprise support agencies, financial institutions, venture capital agents and industry into a coherent, collaborative and cooperative process of engagement.

The Ireland partners involved in eDIGIREGION – Kernel Capital, IBEC, South East Regional Authority (SERA) and WIT – will work with regional stakeholders in the South-East to plan, design and implement an ecosystem of research, innovation, creativity and commercialisation to develop a Joint Action Plan, which will result in the implementation of the region’s smart specialisation Regional Innovation System (RIS). In doing so, the South-East will be able to enhance its sustainable competitiveness by exploiting the region’s strengths and smart specialisations.

Prof O’Gorman continues, “The region-specific Joint Action Plan, and an inter-regional Joint Action Plan with a consortium of partners across the EU, will enhance the South-East’s economic development, the level of new enterprise start-ups, the rate of job creation, the commercialisation of research, and the long term sustainability of the region.” 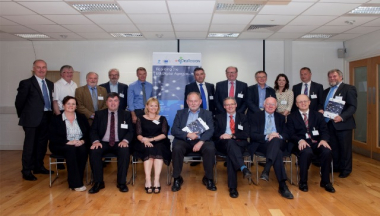