Dr. Fionnuala Kennedy, Language Lecturer at Waterford Institute of Technology (WIT) was awarded a 2012 Language Ambassador of the year award at a special ceremony in the Marino Institute of Education in celebration of the European Day of Languages. This award is coordinated by the European Commission and managed by Léargas in Ireland.

The award, which was given to five individuals across the education sector in Ireland, is in recognition of an individual’s efforts and achievements in language promotion in everyday life, whether it be through research, teaching or writing.

Dr. Kennedy received the award in recognition of her work with colleagues to promote ‘lived’ experiences of languages at WIT. In particular, she has been instrumental in promoting Irish for staff and students, and has worked with Bord na Gaeilge to create opportunities for staff to revive their knowledge of Irish through language classes, language lunches or other activities on or off campus. She has been involved in special events for Seachtain na Gaeilge and the European Day of Languages. Dr. Kennedy has overseen the development of a course in Chinese for Business Studies, which includes integration of Irish and Chinese students in tandem partnerships as a core element.

The Language Commissioner, Seán Ó Cuirreáin, praised the recipients of each award for their work and innovation in language promotion and made several suggestions himself regarding the way forward for languages in Europe. “I would advocate three fundamental principles of importance which should underpin our attitude to all languages – the creation of language awareness, the encouragement of language diversity and the promotion of language rights. That pluralist approach would see the creation of place and space for all languages with a particular emphasis in this country on our own national language”.

According to Dr. Kennedy, “The best way to promote languages is to create awareness through visibility and to provide opportunities for language use in authentic and enjoyable contexts”.

WIT offers French, German, Irish, Italian and Spanish across the Institute, and will offer Chinese for the first time in September 2013.

For more information on languages at WIT, visit the Department_of Languages Tourism & Hospitality 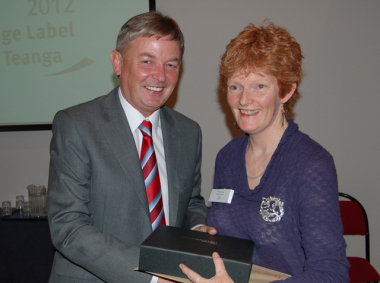