WIT Lecturer Shares Her Designs with the Kennedy Family

Over the past 14 years, volunteers at the Ros Tapestry have been embroidering a set of panels designed by Ann Griffin Bernstorff, which depicts the story of the founding of New Ross. See www.rostapestry.com for more details. This project is now nearing completion.

In 2012, the Committee of the Ros Tapestry asked Reiltín Murphy, a lecturer in Design Visual Communication at WIT to provide them with a pair of illustrative and calligraphic cartoons for their next and very different venture, a pair of tapestries in the form of 7ft ovals.

The first cartoon, ‘Unity’ is about Ireland and its connections with the EU. The cartoon was launched earlier this year at Farmleigh House by An Taoiseach Enda Kenny, during Ireland’s European Presidency.  It is planned that this tapestry will tour European Galleries when it is completed.

The second cartoon ‘Coming Home’ is about Ireland and its American connections. It was launched at the American Embassy in Dublin on 6 June 2013.  The first stitch was made by Kathleen Kennedy Townsend as part of the’ JFK50 Homecoming’ celebrations on 20th June 2013, in the presence of a number of the Kennedy family who had travelled to New Ross for the celebrations. It is expected that the tapestry will tour the United States when completed in five years’ time.

For information on the BA (Hons) in design Visua Communications at WIT click here. 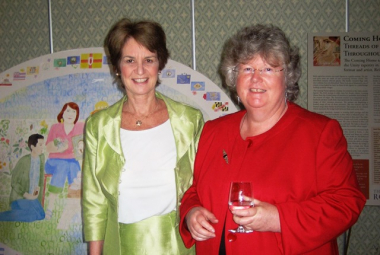