WorldSkills Kazan 2019 was held from August 22-27. Close to 1,300 competitors from 63 WorldSkills Member countries and regions competed in 56 skills

A Waterford Institute of Technology student has won gold at the WorldSkills Kazan 2019 competition while another brought home a Medallion for Excellence.

Team Ireland was overall 10th place in the recent WorldSkills competition in Kazan, Russia, dubbed the ‘Olympics’ of skills competitions. Team Ireland took home 4 gold medals, 1 bronze medal, a Best of Nation medal and 7 Medallions for Excellence. As a relatively small team they outdid themselves, achieving an amazing 10th place in the world overall.

Of the 17 men and women who travelled to Kazan to represent Ireland, two are WIT students.

The 45th WorldSkills Competition came to an end with the Closing Ceremony, which took place at the Kazan Arena Stadium on 27 August.

Future Skills is a specialized zone for showcases and competitions in skills, which are in demand in the era of high-tech production and digital economy. The awards ceremony for this section was held on the day before the overall closing ceremony.

Commenting on his gold medal win, Luke O’Keeffe, who is from Mooncoin, Co Kilkenny said: “It has been an amazing few days. It still hasn’t fully set in what I achieved and I don’t think it will not for another while anyways.”

He went on to say that all the hard work over the summer paid off and he and his team mate Ryan came out on top to win gold.

“It was a long hard summer of nonstop working and late nights. We knew from the start that we had it in us that we had a chance we just needed to believe in ourselves. It was a tough three days of a competition. Not everything went our way but we worked like never before and overcame any obstacles that came at us and prevailed. It was all worth it just to hear your name being called on the winning podium, winning gold for your country.”

Medallion for Excellence in Cooking

Waterford student Hanna Mathe, a final year of the BA (Hons) in Culinary Arts at WIT was awarded a Medallion for Excellence in the 46-competitor category of Cooking for ‘above average’ results.

“The institute wishes to congratulate Team Ireland on their success in the World Skills. We particularly want to congratulation the two Waterford Institute of Technology members Luke and Hanna. It is a just reward for the hard work and commitment to performing at the highest professional level. Their success is also a reflection of the excellence of the teaching community in WIT and the quality of our whole student community. Luke’s gold medal and Hanna’s Medallion for Excellence further validates the institute’s commitment to international leadership in third and fourth level education.”

Minister for Training, Skills, Innovation, Research and Development John Halligan T.D. offered his congratulations to the Irish WorldSkills team upon their arrival home to Dublin Airport .

Minister Halligan was in Kazan to lend his support to the team. He said: ‘‘In itself it is such an incredible achievement to have competed at Worldskills but to be able to also bring home medals, really highlights this team’s individual dedication and commitment to their crafts.  It also bodes well for their future, and no doubt successful careers but also Ireland’s future.”

WorldSkills Kazan 2019 was held from August 22-27. Close to 1,300 competitors from 63 WorldSkills Member countries and regions competed in 56 skills. This was the largest international event in Russia in 2019. 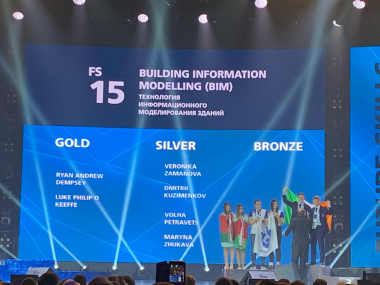