From Bottom of class to top of Apprentice pile

A city woman who struggled with dyslexia and a stammering problem throughout her young life is set to mix it with the brightest young brains in the UK and go face to face with Sir Alan Sugar when she is unveiled as a candidate in the tenth series of the Apprentice on BBC television next week.

Pamela Uddin (24) from Greenfields, Old Tramore Road, who describes herself as a “dyslexic entrepreneur” becomes the youngest ever Irish person to be featured in the show where contestants undertake tasks and project manage teams in a bid to become Sir Alan’s apprentice  – a job which carries a salary of £250,000 (sterling).

The first two shows will be screened on BBC television at 9 pm on Tuesday and Wednesday night next.

Bullied at school and in a constant struggle to overcome her learning and speech difficulties, Pamela whose mother is from Waterford and her father is a native of Pakistan, refused to wear a label and through sheer grit and determination has brought herself from at one time bottom of the class in primary school to the highest level in business.

“Never accept being labelled. You are your own person, you determine who you are and who you want to be,” said Pamela.

Fell through the crack

Even in her early years at the presentation convent primary school, in the city, Pamela began to fall through the education cracks. It was, she stressed, through no fault of her teachers but because of a flaw on the education system itself which has failed too many young people. She was even refused testing for dyslexia-because there were only four available each year and she was deemed not bad enough.

“I thought my poor eyesight caused the letters to dance around the page and when I finally said it to my mum she managed to get the money together – even though she was not working – and paid for a private test for dyslexia” said Pamela. That test changed her life and for the remainder of her times in primary school she got the help she needed. She was also able to devise systems to help herself with homework and learning.

At times, she said that she might have appeared to be disruptive because she wanted to walk around and talk. “In terms of learning, I can only explain that if a teacher was talking about a tree and started working from the root up – in seconds I would be gone onto the first branch, then the second and so on – in my own head exploring new ideas and possibilities. “I was racing from one great idea to another and I knew that no matter what people thought of me I was not stupid,” she added

Life for only child Pamela changed in her later years of primary school and changed completely in secondary though she still found it difficult in class. She was often isolated by her peers and found it difficult to make friends. Life became all about techniques and she even recalls preparing an essay for examinations, which through changing the first paragraph could be adapted to any situation. However if she forgot the first word she forgot the entire piece. Maths was and continues to be a problem. She says she still adds and subtracts using her fingers but she has no problem at all with Pythagoras.

After her leaving certificate Pamela embarked on a Marketing Degree at WIT and that’s where her life really changed. “I went to all my lecturers and told them who I was and that I had dyslexia. I said these are my issues and asked if it was ok if I could email them if I had trouble with any subject. They were happy to help and often I emailed a lecturer five times a day,” she said. Her lecturers were hugely supportive throughout her four years at WIT and she believes that if she had gone to Dublin or a university in any other part of the country she would not have received the same personal support.

Learning issues were not Pamela’s only problems. There was also a question of money which was tight in her single-parent family bearing in mind that her mum Gina, didn’t return to the workforce until Pamela was 15. While undertaking her degree at WIT Pamela received a grant but she admits she also relied on the support of St. Vincent de Paul.

At the end of her four years Pamela graduated with first class Honours. Her thesis for her degree brought her, in part, to the next-level-a masters at the Smurfit Business School. Her thesis, “Corporate culture and the change of Irish Government”, which looked at different policies such as health care, transport and how we do business, was entered in a competition. Around the same time she was put forward for a scholarship in the Smurfit Business School and ended up with Paul Candon, the marketing and HR director of Topaz as her mentor. She faced a tough selection process and got the scholarship but by Christmas and halfway through her studies she was broke and faced the prospect of leaving her studies behind. A girl who always seems to be in the right place and the right time, and recognized for her hard work and determination, she was put in touch with a benefactor who anonympously paid the out-standing €6,000 for her studies. Pamela asked how she could pay the money back and the benefactor replied “You can pay me when you are CEO of your own company”.

With an MSc in hand Pamela took her first job with L’Oriel in Dublin. She held the position until January of this year and she then moved to the UK to take up a position with Unilever where she is responsible for major advertising campaigns and product market growth. With a new phase in the life of the gutsy 24-year old about to take off, Pamela says that her role model is her mum and now she wants to give something back. She does not see herself as a role model but feels that she can support people with dyslexia or those who stammer.

How her UK Apprentice experience develops is yet to unfold but when it is over she hopes that she can leverage as much as she can from it and develop a business plan centred on doing workshops and lectures for people with dyslexia as well as advising teachers on different skills to deal with dyslexia.

Click here to see all of WIT's Business programmes.

Click here to find out more about our student supports. 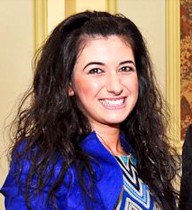