This show from WIT will recreate many of historical figure in the world of science, Robert Boyle's experiments in fundamental areas of physics

Two WIT staff members who work in WIT's science, technology, engineering and maths outreach centre have been selected to present the 2017 Institute of Physics Tyndall Lecture series across Ireland. Altogether there are nine lectures nationwide.

"This is a very prestigious event," said Sheila Donegan who will deliver the Tyndall Lectures 2017 series alongside Eoin Gill with "The Life and Legacy of Robert Boyle".

"Robert Boyle was one of the most important figures in the development of modern science. He made discoveries across a wide range of areas. Born in Ireland in 1627, he lived and worked in Oxford and London, often working closely with his sister Lady Ranelagh. Boyle worked at a time when there were many competing approaches to investigating the world and he was most influential in establishing experiment as the key way to building science. His experiments were performed in front of gatherings of scientists and dignitaries and were famous throughout Europe. This show will recreate many of Boyle’s own experiments in fundamental areas of physics. The audience will learn about the weight of the air, behaviour of gases under pressure, characteristics of vacuums and other phenomena by witnessing these demonstrations as an audience did 350 years ago. They will also understand how modern science emerged and gain an appreciation for what science is," she added. 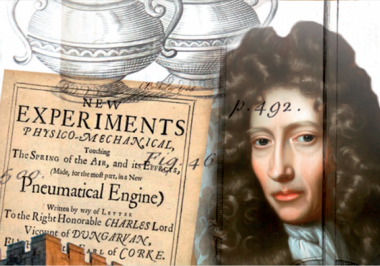