Women in Science Spring Reception at Áras an Uachtaráin

A selection of WIT women in science recently attended a reception at Áras an Uachtaráin at the invitation of the President of Ireland, Michael D Higgins.

The event was aimed at celebrating the leading role that women are playing in scientific research and industry. He organised the event to highlight the achievements of female pioneers in the world of science and of the many eminent and illustrious women in attendance.

President Higgins wished the women in science success in their fields of expertise, in their future careers and in their capacities as inspirational role models for the scientists of the future.

The delegation from WIT joined representations from all other institutes of technology and universities along with women in science outside the education sector.

“We were privileged to be invited to this reception for women in Science held at Áras an Uachtaráin. President Higgins and his wife Sabina were welcoming and gracious hosts spending time talking with each group in attendance,” said Dr Orla O'Donovan, Head of Department of Science, WIT

“President Higgins gave a wonderful speech outlining the importance of Science and commending the leading and inspirational role that women have in the scientific field here in Ireland and globally,” she added.

“Science is an important and influential discipline – one which has a pivotal role to play in the great concerns of humanity in our time, and one which has the potential to make the greatest contribution to improving our world,” said President Higgins.

“As experts in their fields, award winners, holders of distinguished Chairs and Professorships, esteemed researchers, writers and lecturers they are breaking new ground and paving the way for new generations of women who will also wish to use their talent and creativity to pursue careers in science, technology, engineering and maths, and play their unique role in crafting a better world,” he continued. 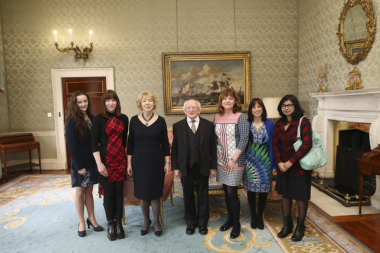