ITC And WIT Collaborate On Inaugural Clubs And Societies Week

WIT and IT Carlow have come together to produce a virtual clubs and societies week. This week will consist of many online events for all to come and see

Institute of Technology Carlow and Waterford Institute of Technology have collaborated on a week-long celebration of their sports clubs and societies down through the years in the inaugural Clubs and Societies Week that kicks off tonight with symbolic opening ceremonies from the WIT Arena and IT Carlow’s South Sports Campus featuring student members.

Online documentaries, interviews, podcasts, vintage footage, addresses from both presidents and a closing ceremony are amongst the initiatives scheduled for Clubs and Societies Week that will be jointly celebrated by both institutes. Organisers are describing the initiative as “a trip down memory lane and a reflection of how our clubs and societies have evolved, developed and thrived since their inception on both campuses”.

“At this time of year, we are usually preparing for our clubs and societies awards ball. However, this was an unusual year with limited activity so we decided, with our counterparts in WIT, to create something new and reflect on the success of our clubs and societies, and the leaders who made this possible, over the last 20-plus years. It is a fitting showcase of both institutes as we mark 50 years since our founding and progress to become a technological university next year”, commented Director of Sport for IT Carlow, Donal McNally.

“This collaborative project has allowed us to build on the excellent working relationship between WIT Vikings - the WIT sports and societies brand, together with WIT Novus, which runs the non-academic lifestyle services at Waterford IT - and the sports office and students services in IT Carlow. Together with the students’ union of both institutes, we have provided a virtual week allowing us to look back and celebrate the endeavours of sports, clubs and societies on both campuses. This event also provides us with an opportunity to highlight, to the student population and wider community, the journey that both institutes are on to becoming a technological university”, commented Lizzy Kent, WIT Viking Sport and Societies.

Clubs and Societies Week will begin at 8pm tonight with a special opening ceremony at WIT Arena and South Sports Campus at which a ceremonial flame will be lit to mark “a new spark” between both institutes as they work towards building a technological university for the south-east.

Online content scheduled for the week include a series of documentaries, including the launch of the WIT Vikings and clubs and societies awards ceremonies in IT Carlow. Viewers can also enjoy a selection of video memories, including Phil Healy’s and Marcus Lawler’s record-breaking performances, Fitzgibbon Cup championship wins and other outstanding sporting plays.  There will be podcasts too on the history of the clubs and societies of each campus.  Online contributions from well-known sports people include: Áine O’Gorman; Kate Kelly; Molly Scott; Ursula Jacob and Stephen O’Keeffe.

The full schedule of events is available across both institutes’ online and social media platforms.

WIT and IT Carlow will be active on social media during Clubs and Societies Week with competitions inviting people to like and share content, including footage of memorable sporting action down through the years.  Archived footage featuring photos and press clippings of clubs and societies from 1970 – 2020 will also be presented across both institutes’ online platforms.

Clubs and Societies Week is set to be a hugely successful collaboration between the WIT and IT Carlow sports offices, student’s union and student support services, and work on the initiative began in March. IT Carlow and WITSU have been key contributors to the project and instrumental in the production of video footage, including the opening and closing ceremonies.

“We are very grateful to the inter-departmental teams across both institutes who have worked so hard to bring about what will be a very memorable week”, said Lizzy Kent.

“We see this as great way of engaging staff and students in both institutions and also reaching out to alumni and prospective students”, said Donal McNally. 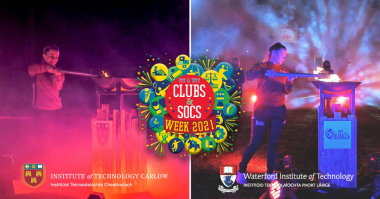 Statement from the Governing Body of Waterford Institute of Technology