Purple Flag Waterford partnering with WIT Students Union and working with local venues launched an ‘Ask For Angela’ campaign - a simple code-word campaign for people feeling unsafe while on a date.

The campaign welcomed by local venue owners and managers as a positive step in raising the perception of safety levels in Waterford will be fully in place for the busy Christmas party season.

Michael Murphy, President of WIT Students Union commented that ”the ‘Ask For Angela’ campaign has the potential to make Waterford a safer place by encouraging people to discreetly ask for help by going to venue staff and 'Ask for Angela' - a phrase aimed at alerting staff so they can help defuse a situation. It is encouraging to see so many local businesses engaging with the campaign, all with a common objective to protect people who find themselves in vulnerable or distressing situations”

Eric O’Brien, Chair of the Purple Flag Working Group outlined that the 'Ask for Angela' campaign gives assurance that where required, informed assistance is available. He commended the support shown by venues who will display campaign posters encouraging those in a situation where they feel vulnerable to approach staff and ask for 'Angela'  - this code word will alert staff that help is needed to  get out of a situation discreetly. Angela was a play on the word (guardian) Angel. The posters are up in male and female toilets, and provide reassurance there is support available if needed. The campaign has got global attention since introduced by Hayley Child in Lincolnshire, England in 2016. 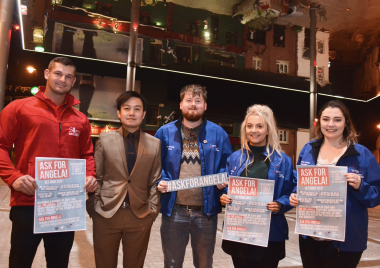