A WIT Masters student, Phil Healy is to represent Ireland in three athletics disciplines at the Tokyo Olympics. Her events are 200m, 400m and 4x400m mixed relay.

MSc in Computing (Enterprise Software Systems) student Phil (26) is a WIT Vikings Elite Sports Scholar and is known as Ireland's fastest woman (in 100m). Phil begins her Olympic adventure in Toyko on Friday, 30 July at 12pm Irish time in the first heat of the 4 x 400m mixed relay event. She will go on to compete in a further two events, the 200m and 400m. Healy is one 116 athletes will compete for Team Ireland across 19 sports, with action running from Friday 23 July-Sunday 8 August 2021.

The Bandon native trains under WIT Vikings Sport Athletics Development Officer, Shane McCormack and utilises the state of the art facilities at WIT Arena as one of her main training bases. Her sports psychologist is Dr Ciara Losty, WIT Department of Sport and Exercise Science lecturer and as part of her sports scholarship programme she avails of physio supports, academic supports and financial bursaries.

MSc in Applied Sport and Exercise Psychology course leader Dr Losty is with Team Ireland in Tokyo as a performance psychologist and is also working as the transition psychologist - "so when all the athletes return to Ireland they will have support and a check in to help them decompress after the games or direct them to any support needed," she explains.

Wishing @CiaraLosty a SAW board member as she supports athletes in Tokyo S a part of Team Ireland ����support staff https://t.co/aHuzt81kRX

The Irish record holder over 100m (11:28, 2018) and ranked second over 200m, Phil was just pipped for a 400m medal at this year’s European Indoors. She is a European junior finalist and a two-time World Student Games finalist. Phil won her 14th National Title this year when she won the 200m and 400m. Her 400m PB, set in Belfast in May, places her third on the Irish all-time list behind Joanne Cuddihy and Karen Shinkins.

Speaking prior to her departure Healy outlined her appreciation of the support she has received "the sports scholarship programme in WIT is second to none and for me it was a game changer and is so well established. The services and supports offered to me have made a massive difference to me in terms of my sporting career. I’m so grateful for all the help and support from everyone at WIT Vikings Sports and the WIT Arena."

WIT Novus CEO Mike Geoghegan described Phil as the consummate professional and an inspiration to everyone. "The Olympics is the pinnacle of an athlete's career and everyone in WIT, WIT Novus, Vikings Sport and the WIT Arena would like to wish both Phil and her coach Shane the very best of luck at the Toyko Olympics."

We’re off to the big dance in Tokyo�� Couldn’t be prouder of this ladies achievements, breaking barriers and showing what can be done with a plan, drive and ambition. To qualify in 3 events is a bonus. Thanks to all who helped along the way you know who you are. Game on ������ https://t.co/X0CMtErGFZ

Watch Phil in action at the Olympics

Keep up to date on social 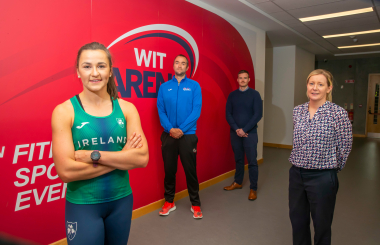 Pictured at the WIT Arena prior to departing for the Olympics in Tokyo are from left Phil Healy, Shane McCormack, Jack Lyons and Donna Drohan