A hotel with too many vacancies

Bee hotels (sometimes called insect, or bug hotels) are artificial nesting structures available for sale in many garden centres around the country and some community groups and gardeners have even constructed their own from bricks, drilled softwoods, bamboo, straw and loosely arranged pine cones.

However, despite the owners’ best intentions, these structures rarely attract their intended inhabitants, and sometimes can even attract pollinator pests and are a source of disease.

The project progressed to examining 39 DIY-built insect hotels situated on the Waterford Greenway which involved examining 3377 individual cavities. The outcome was the following guidance, published by the Royal Horticultural Society of Ireland, on how to design your own scientifically sound bee hotel that is likely to attract visitors.

The following article is reproduced here with the kind permission of the Royal Horticultural Society of Ireland and appears in their Autumn 2020 issue.

Planting for pollinators has become popular but if we are to halt the decline in pollinator numbers, it is also vital that we provide nesting habitats in our gardens. Many of us will have seen bee (or insect) hotels popping up in our localities, or for sale in garden centres. In Ireland, we have 98 species of bee consisting of 77 solitary bee species, 20 bumblebee species and 1 honeybee species, however realistically, only cavity-nesting bees have the potential to use bee hotels, and it turns out those bees are quite fussy!

Fifteen species of Ireland’s solitary bee species prefer to nest above ground in cavities in wood created by insects such as borer beetles or woodworm, in hollow or pithy plant stems, or in man-made structures such as cracks in mortar, dry stone walls, or nail holes. In fact, one can purchase ‘bee bricks’ for this exact purpose.

Of all our native bees, it is realistically only the cavity-nesting bees that have the potential to use bee hotels which are typically a bundle of hollow plant stems or pieces of drilled timber placed in some form of housing. Unfortunately, many of the commercially available bee hotels are quite useless but when built and placed according to known scientific design parameters, bee hotels can be very effective.

Here are those parameters:

1. Small bee hotels are best because large bee hotels increase the incidence of bee pest and disease due to high populations of bees nesting together, with parasitic wasps being a particular threat.

2. The material used for nesting tubes is critical. Common reed, or bamboo are preferred, but these must be cut at a node to create a closed-ended nesting tube. An open-ended tube with the node removed increases the risk that predators and parasites can gain entry from the back of the tube.

4. The cut end of the bamboo or reed must be clean and free of debris (especially wood fibers as a result of using blunt blades).

5. The orientation of the bee hotel entrance must face south or south-east and be attached firmly to a wall or post at least 1.5m above ground. This gives the developing young some warmth from the morning sun and shelters them from harsh northerly and easterly winds.

6. Housing of your bee hotel should be waterproof. Wood is not a suitable external housing material for Irish conditions as its porous nature can lead to damp internal conditions that encourage fungal and bacterial diseases which may endanger the developing young bees.

7. Your bee hotel should be maintained each year and any previously inhabited bamboo or reed cavity replaced to ensure pests and disease levels do not build up.

Given all these requirements, it is no wonder many of the bee hotels we see in Irish gardens have plenty of vacancies - It appears that many are designed to be aesthetically appealing to humans, rather than the residents.

Solitary bees forage within 100-300m of their nesting sites so when choosing to put a bee hotel in your garden, nectar and pollen-rich flowers must be available for the bees to forage on in the surrounding landscape. Given that bee hotels help only a handful of the 98 species of bee found in Ireland, gardeners should also consider providing nesting habitats for the other bee species by letting a wide verge of lawn grow along a garden hedge to provide nesting habitat for bees such as the common carder bee which nests in long grass. For solitary mining bees, removing vegetation on a south-facing bank creates bare soil into which they burrow.

Sean Keane and Cian Kervick have constructed a scientifically sound bee hotel for Irish conditions using common reed, bamboo and PVC piping. Please visit our Heritage Week 2020 project at www.instagram.com/beesbandb to find out how to build one and to learn more about the biodiversity on our doorsteps. The RHSI are offering a yearly subscription for students for €15. See here the RHSI website for more information. 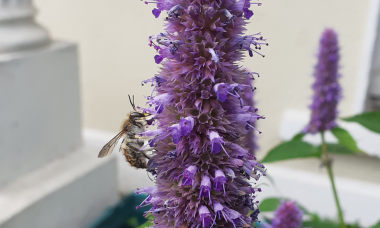