The scholarship scheme, which had its first cohort in 2016, encourages and rewards young people who show a capacity to shape a better society

James Conway, a past pupil of CBS Secondary School, Mitchelstown, Co. Cork is one of five first year students at Waterford Institute of Technology (WIT) to be awarded a President’s Scholarship.

He is a student on the BSc (Hons) in Agricultural Science.

In his scholarship application he outlined how he had the potential to shape future society.

“My previous understanding of a ‘scholarship’ was for academic overachievement or paranormal athletic powers but I said I’d give it a go as I was very interested in attending WIT.

“Now, I was always diligent at the books in CBS and also gave a good account of myself at school, club an county level GAA but where I felt I carved a niche in society was through my contribution at local GAA youth referee/coaching roles and community volunteering which earned me a President’s Gaisce Bronze medal.”

At broader societal level he has submitted opinion to the Oireachtas Committee White Paper Consultation on issues as he believe it’s important to include your voice.

“I’ve also an interest in geo-political issues and won a coveted place on a student deputation to Israel in 2017 to observe and be educated about daily life in Israel so I could advocate and inform others of my findings.”

James explains why he applied for the President’s Scholarship: “I read on the WIT website that the Scholarship was a new and Innovative which aimed to support to individuals so allowing them to further their potential. I was already very interested in studying Ag. Science Level 8 in WIT which is a university level Institution in my locality and attaining the scholarship would open interesting doors and offset expenses, so I gave it a good shot”.

“What I now like about Ag. Science is the comradery among the lads on the course and how we support each other through the steep learning curve of third level life - both on campus and off.”

The first year student is studying Ag. Science (level 8) and his dreams for the future include: travel and its experiences, possibly further post-graduate study and who knows after that. 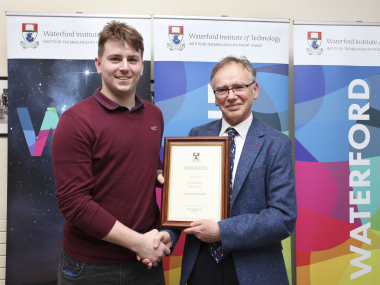