Classrooms are great for teaching knowledge, but life’s most important lessons can’t be found in textbooks. Recognizing this, faculty at the University of Washington Bothell and the South East Technological University created a different study abroad opportunity.

Reposted from University of Washington | Bothell

This spring, two students from UW Bothell’s School of Nursing & Health Studies spent the quarter in Ireland at SETU (formerly known as Waterford Institute of Technology) while two students studying public health from SETU spent theirs at UW Bothell. These four students — traveling across countries, continents and oceans — were the first cohort to participate in the Transnational Education and Community Health Collaboratory’s first “Mobile Traineeship” program.

The TEaCH CoLab is an academic collaboration between the two institutions founded in 2017 by Dr. Jody Early, professor in SNHS, and Dr. Niamh Murphy, a faculty member at SETU, with a mission to “tackle complex public health challenges globally through innovative community engaged methods, digital technologies and transdisciplinary pedagogy.”

More than an educational exchange

Early and Murphy received funding from the UW’s Global Innovation Fund, the Republic of Ireland and the Erasmus+ Higher Education Mobility Programme. The CoLab has grown to involve faculty across disciplines such as public health, nursing, film and media studies, computer science and gender studies.

“More than an educational exchange, the CoLab is a sharing of cultures, experiences and differences,” said Mairead Barry, faculty at SETU. “A lot of these skills cannot be taught or learned in a school setting. One has to experience them instead.”

Added Early, “the program facilitates global learning opportunities for students to develop self-awareness of their own identity, culture and beliefs — and how those connect with the wider world,” she said. “Having that awareness is essential to strengthening global health promotion and to creating a more just and equitable world.”

More than just the students learn from the experience, said Murphy. “In addition to student exchanges, faculty are also learning from one another. Over the past four years,” she said, “some of the CoLab faculty and staff have traveled abroad to work together on pedagogy and research projects, and to visit each other’s classrooms.”

Not all classrooms have four walls

Early and Murphy first met through colleagues in 2017. They connected almost instantly and were surprised to learn that they had similar goals despite doing work in communities that are continents apart.

“We both work with a lot of community-based organizations that improve health equity and human rights,” Murphy said. “We feel passionate about helping students understand that the greatest lessons are learned beyond the classroom. Many of the competencies we are trying to help our students develop are gained from working in and with community — and go beyond specific disciplines.

“So we thought, hey, wouldn’t it be great to connect with one another and provide aspiring health professionals with global perspectives and experiences?”

Leahy presenting about her experience in Washington for the final project

Five years and one pandemic later, this aspiration is now a program that has shaped the lives of Georgina Leahy, Vincent Bohol, Jennifer Dinh and Mindy Vu. These students spent two months working with their host country’s community organizations to examine and work on a range of regional public health issues, from loneliness to sexual health. In the process, they were able to learn more about differing health-related policies and systems.

“Students find out pretty quickly that not only are the weather and routines a little different, but that social lives, health care systems, politics, priorities and attitudes can differ, too,” said Jenny O’Connor, another SETU faculty member. “I hope they realize that they can travel anywhere and take part in new things once they open themselves up to the challenge.”

The differences were certainly apparent for Vu, a UW Bothell student who has spent her entire life in Seattle. She has always driven the same roads, gone to the same restaurants and known the same people. That is, until her senior year of college when, for the very first time, she traveled to a different country. “Going to Ireland, I waved goodbye to everything that was familiar in my life and set off for something new,” she said.

Also leaving home for the first time was fellow student Dinh. “It has been my dream to study abroad in college ever since I was a young child,” she said. “And I finally got to do it in my last quarter of university.”

Dinh and Vu are Health Studies majors and childhood friends. They both agreed that going through this experience together made it all the more memorable — and a little less scary. “There was so much newness and strangeness,” Vu said.  “Having Jennifer there with me was such a blessing. She was my constant in all of the change.”

Those changes included everything from languages and customs to escalators without steps and mozzarella sticks at McDonald’s. And while they were there to experience life in a different country, they were also there to study the health care system which had its own set of differences, too.

Working with local organizations in Waterford, Ireland, the most prominent difference the students noticed was social prescribing, a common practice in treating loneliness and depression. “General practitioners, nurses and other health care professionals in Ireland refer people to a range of local, non-clinical programs and services through a community-based social prescribing link worker,” Dinh explained. “But people can also self-refer to these programs as well.”

Vu pointed out that in the United States, and across the world, doctors aren’t trained to treat loneliness. “As humans, we need to have intimate, relational and collective connections with others. When we don’t, our mental health suffers,” she said. “Doctors can treat depression and anxiety, which can stem from loneliness, but it’s only from being in community that the cure for loneliness can be found. I think social prescribing is so great and something that would be really beneficial here in America.”

The Irish Men’s Sheds Association was another program that Vu and Dinh worked at and found inspirational. They said they would love to replicate it in the United States. “The organization brings together middle- to late-aged men who are retired and searching for meaning outside of the workforce,” Dinh explained. “It’s meant to foster connections and community, aiding in men’s mental health.”

In both countries, mental health carries stigma and especially so for men. “Toxic ideas about masculinity can lead men to want to seem tough and not talk about their feelings,” Dinh said. “At one of the sheds, one of the men was a carpenter, and he has been teaching the members how to build different things with wood. I think that’s great because it makes them more comfortable — working with their hands and doing more traditionally masculine things — and I think that having that physical distraction makes it easier for them to open up.”

Irish students Leahy and Bohol also found organizations that they would like to replicate back home. One is the King County Needle Exchange, a public health program for people who use drugs by injection.

“Ireland, like the U.S., has a large population of people who are unsheltered, or housing insecure; this is often accompanied with substance abuse. In Dublin, like in Seattle, many are addicted to opioids.” Bohol said. “I think it’s important for people to have access to sterile syringes, clean injection equipment and Narcan because it will end up saving lives.”

Leahy said the program was necessary for another reason, too. “I noticed that a lot of people who came in didn’t even want the equipment, they just wanted someone to talk to,” she said. “A lot of them didn’t have people in their lives they could connect with or just spend time with, and I think that’s what they wanted more than anything else.

“My heart really hurts for them, and I hope to work more with people in these circumstances when I am done with my studies.”

One of the biggest surprises for Leahy and Bohol about the health care system in the U.S. was its emphasis on sex education. Bohol said that in Ireland, where Christianity is the predominant religion, talking about sex is considered taboo. “Our parents definitely didn’t sit us down and have a talk like they do here,” he said. “We just kind of figured it out on our own, and when or if it was ever discussed, the message was always to refrain from it.”

One of the organizations the students worked at was Public Health – Seattle King County, under the mentorship of health educator, Celia Thomas. Part of their responsibilities included educating high school students on safe sex practices and contraceptive options. “Standing in front of a bunch of 15-year-olds talking about IUDs, condoms and sexually transmitted diseases was quite interesting to say the least,” Bohol said. “I was definitely outside of my comfort zone, but I mean, that’s what I wanted: to stretch myself.”

Also unexpected was the work culture. Leahy, for example, was shocked that many coffee shops in Seattle open at 5 a.m. “I couldn’t believe it. Our culture is very slow paced and relaxed. We normally don’t wake up until around 8 a.m. so businesses just don’t open that early,” she said.

She also found it strange to receive emails from professors later in the evening, as the work days both start later and end earlier in Ireland. “We normally are finished with school or work by 4 p.m. or 5 p.m., and we don’t continue working when we leave,” she said. “It was interesting to see that in America, most people continue to work — even until late at night!” Andrea Stone, associate professor in UW Bothell’s School of NHS, said that “not only did the students have an opportunity to learn from faculty and partners, but they learned from each other. The students had such a willingness and openness to participate in a vast array of projects and settings with community partners,” she said. “And when they reflected about their experiences and what their experiences meant to them, I felt like I was learning from them, too.”

All four of these students said that who they were before they left for their trips is not the same person as who they are now — and that sentiment was validated by Early and other participating faculty.

“I have personally witnessed so much growth in the students over the past few months. They are more confident and ready for whatever life throws their way,” Early said. “They left their country, their friends and their family in a time of uncertainty and embraced every opportunity.

“This experience took more than a village; it took a global community of partners, faculty and students coming together during very uncertain times to make this all happen. It was so uplifting to see my colleagues here and abroad offer their time and energy to create this unforgettable experience,” Early said. “We are all changed for the better because of it.

“They have made their family, colleagues and institutions very, very proud.” 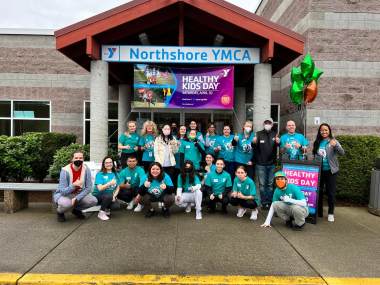