The Optics Research Group (ORG) is a multidisciplinary research team based in the Department of Computing, Maths and Physics. The activities of the group span many different aspects of optics and photonics.

Our laboratory is on the Cork road campus of WIT; please feel free to contact us at any time to arrange a visit or discussion.

Specific technologies developed in the group are outlined in the Resources section. 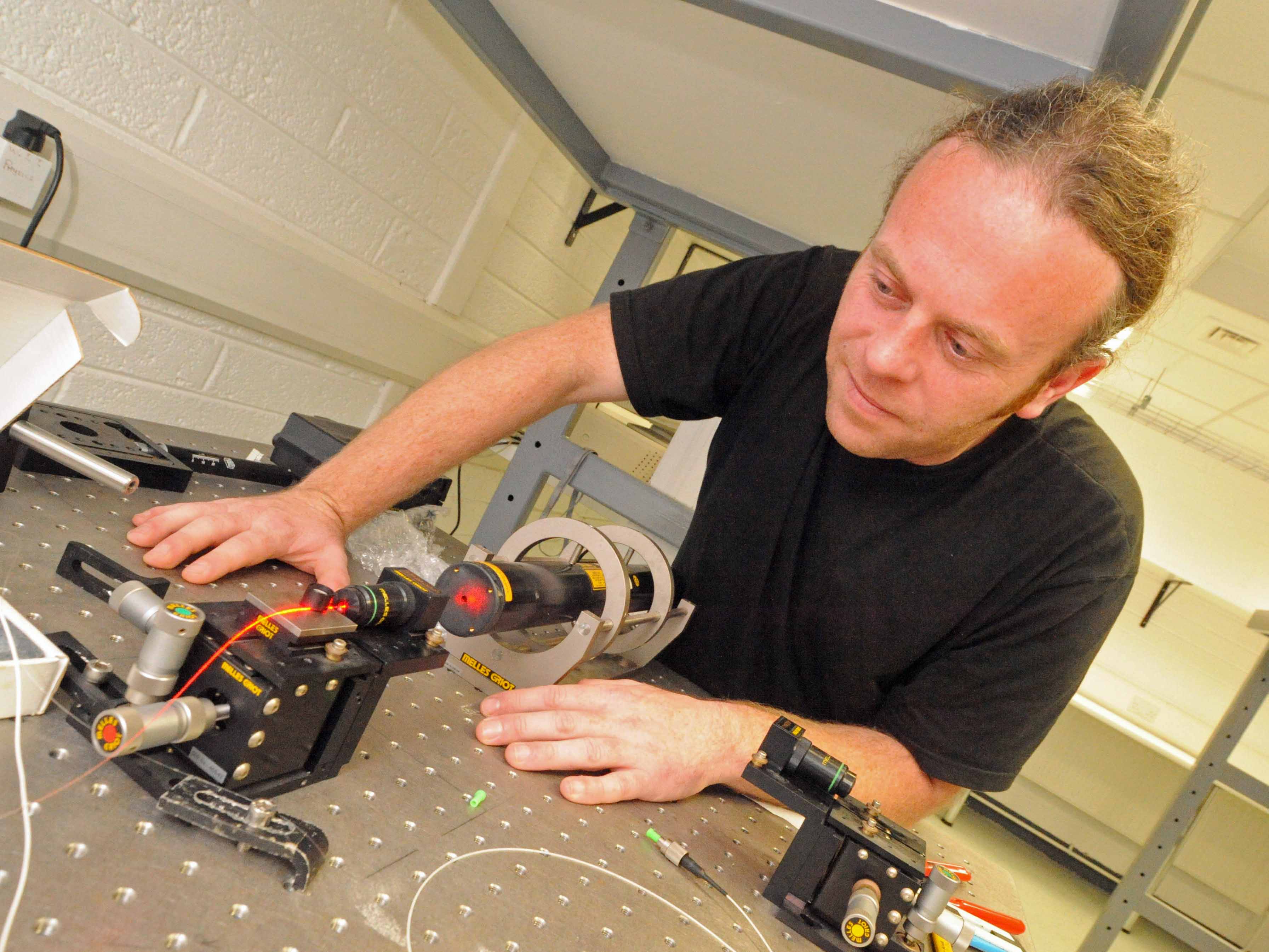 Dr. Kieran O’Mahoney is a post-doctoral researcher with the Optics Research Group in Waterford Institute of Technology. He completed his PhD degree in W.I.T. in 2007    and after a brief period as an optical engineer with StockerYale (IRL) he returned to the Optics Research Group to take up his current position. He has experience in the areas of interferometric spectroscopy, fibre optic sensor interrogation, doped optical-fibre amplification, fibre component reliability, automation and control. He has published and submitted 3 journal, 6 conference papers and 1 patent application related to the characterization of high-concentration erbium doped fibres and lasers, Michelson / Mach-Zehnder interferometric fibre Bragg grating-based temperature sensor demodulation systems and fibre component reliability. He has also worked as a visiting researcher in Aston University, Birmingham, U.K. on a project to determine the implications of high power losses in optical fibres. 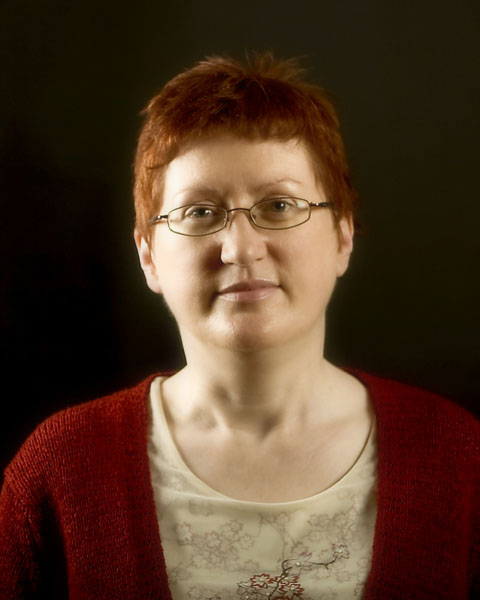 Dr. Keary is a lecturer in the School of Science and also a member of the Materials Characterisation and Processng group.

Research at the Optics Research Group

Quantum dot (QD) based photonic materials are currently receiving a large amount of attention due to the interesting blend of atomic and solid state properties that they possess. By fabricating semiconductor lasers (SLs) from such materials, researchers have demonstated devices that exhibit temperature insensitive, low threshold currents, high modulation bandwidths and a low sensitivitiy to optical feedback. In addition, semiconductor optical amplifiers (SOAs) from such materials are expected to provide new opportunities for ultrafast data processing, while monolithic mode locked lasers made from QD materials have demonstrated enhanced jitter performance. QD SLs have also demonstrated improved beam quality over their quantum well (QW) counterparts, exhibiting reduced filamentation and superior M2 values up to 45mW in output power.
The general improvement in QD SLs when compared to QW devices is due to their unique carrier dynamics which results in a reduced phase-amplitude coupling (alpha-parameter) and increased relaxation oscillation damping, both factors contributing to a non-linear system less sensitive to internal/external perturbations. The aim of this topic is to investigate how QD materials can improve the stability of spatially extended laser devices towards providing coherent emission in the multi-Watt range.

The gain mechanism in Raman amplification is the stimulated Raman scattering (SRS), a process by which energy is transferred from the pump wavelength to a longer (100 nm shift) signal wavelength through nonlinear inelastic photon scattering on an optical phonon. It has been found recently that unlike the other optical amplifiers (semiconductor optical amplifier, linear optical amplifier, erbium doped fiber amplifier), only the discrete and lumped fiber Raman amplifiers (FRAs) can provide the wide bandwidth gain to develop a long-distance metro/access network by enlarging the power budget for coarse wavelength-division multiplexing transmission systems. However, the polarization-dependent gain (PDG) (difference between the maximum and minimum gain) and gain fluctuations (GF) in FRAs can degrade the performance of a fiber optic communication system. Therefore, the dependences of PDG and GF on fiber birefringence (polarization mode dispersion (PMD), birefringence and beat correlation lengths) and on the pump state of polarization (SOP) have to be found.

In our previous papers we demonstrated experimentally and theoretically that the dependence of the PDG on PMD split into two branches of maximum and minimum values for different pump SOPs. Results obtained in some other experiments describing the PDG, in which the pump SOP was not controlled, correspond to intermediate values between the maximum and minimum PDG. In the approach developed by Lin and Agrawal, the evolution of the birefringence vector for a signal wave was presented as a three-dimensional (3D) Gaussian process in the reference frame of the pump polarization. As a result, the PDG and GF were obtained as independent of the pump SOP. Unlike this approach, we used a more general representation of randomly varying birefringence in the form of fixed birefringence strength, and the birefringence vector orientation was driven by a white-noise process (fixed modulus model). As a result, we have found the PDG as a function of pump SOP and PMD value.

The physics of quantum dot (QD) photonic devices has been a subject of great interest since the development of self-assembly growth techniques. One of the principle motivating factors for the study of QD lasers was the possibility of substantially reducing the phase-amplitude coupling (alpha-factor) of semiconductor lasers from values in the region of 3-5 for quantum well devices. Amongst the expected benefits of such a reduction were low modulation chirp, reduced filamentation in high power devices and reduced sensitivity to optical feedback.

To date, QD lasers have displayed a wide range of alpha-factors, the value displaying a strong dependence on the measurement conditions. Recent analysis has shown that the low ground state (GS) gain saturation of QD devices coupled with a large amount of non-resonant carriers in the QD's excited states (ES) and barrier states can result in large values above threshold and as a consequence, directly phase modulated devices have been demonstrated. In addition, it has been proposed that the unique carrier dynamics of QD semiconductor optical amplifiers (SOAs) would lead to a reduction of patterning effects compared to conventional devices, for both linear and non-linear applications. As the understanding of relevant carrier relaxation processes in QD structures improves, additional device functionalities will be realised.

The work on quantum dot dynamics is carried out in collaboration with the Photonics Device Dynamics group, CIT and Tyndall National Institute.

Recently, much research and development has been devoted to the design of an efficient and short-length erbium-doped fiber amplifier (EDFA) with a high doping concentration of erbium ions 1020 –10 21 cm −3 . Increased erbium concentration leads to degraded amplifier performance owing to migration-assisted up-conversion processes. To characterize the performance of a high concentration EDFA, models accounting for the upconversion of excitation on homogeneously distributed (homogeneous upconversion, or HUC) and clustered erbium ions (pair-induced quenching, or PIQ) have been exploited.

However, a detailed microscopic study of erbium-doped glasses by means of x-ray absorption fine structure spectroscopy has found no evidence of short-range pair clustering of Er3+ ions. Therefore more accurate physical models have to be used for fitting experimental results. Sergevev reported a model satisfying such criteria. Unlike HUC and PIQ models, this model takes into account only the variance in the distances between excited erbium ions. Averaging over the variance in the separations, we derived a system of macroscopic equations that was used successfully to fit experimental results for the EDFA’s gain as a function of the fiber length. However, the absence of some of the EDFA’s parameters, for example, emission and absorption cross sections, led to a lack of important theoretical results, for example, gain and noise figures as functions of signal power.

We have developed a complete model of the high-concentration EDFA accounting for the statistical nature of migration and upconversion processes and prove its reliability by fitting to published experimental data. We have shown that this statistical model exhibits better applicability for the characterization of high-concentration EDFAs than the model accounting for homogeneous upcon-version and PIQ.

In the optical sensing community, there has been intense interest in the interaction of light with both itself and matter for sensing of measurand-induced environmental changes. Smart sensing is a recent and fast growing field of optical metrology and is closely linked to the field of structural health monitoring, which is typically imple- mented using optical fibre sensors. Fibre Optic Sensors (FOS) exhibit significant advantages over conventional electro-mechanical sensors such as high electromagnetic immunity,measurement of a wide range of measurands, small size and high sensitivity.

Ideally, these sensors would be accompanied by a series of actuators to allow a structure to compensate or correct for any changes in position, strain or temperature which deviate from its position of equilibrium. Fibre Bragg gratings (FBG) represent a key element in the field of optical fibre sensors. From the earliest stage of their development, fibre Bragg gratings have been considered for use as sensor elements capable of providing quasi-distributed sensing, suitable for measuring static and dynamic fields such as temperature, strain and pressure.

They have become an important component in the development of smart structure technology. The key advantage of fibre Bragg gratings over other optical fibre sensors is that the measurand is directly encoded in the reflected wavelength. Since the wavelength is an absolute parameter, the signal returned from the FBG can be processed such that its information remains immune to power fluctuations along the optical path. In addition, gratings can be written using a variety of inscription methods at well defined wavelengths. They can operate over application-specific ranges making them most suitable to wavelength division multiplexed (WDM) approaches. As such any interrogation system should be compatible with multiplexing,so as to reduce costs and take advantage of the suitability of these sensors for quasi-distributed sensing.