Welcome to the Radioactivity in the Irish Coastal Environment (RICE) Project

This three-year EPA-funded project is being led by South East Technological University (WIT) and will be carried out in collaboration with UCD, NUIG and the EPA’s Radiation Monitoring Laboratory. The aim of the project is to provide a status update on artificial radioactivity levels in the Irish coastal environment by revisiting some of the sites from previous surveys whilst, at the same time, widening the scope of these surveys to include a range of natural radionuclides with a view to establishing a baseline with which to assess future concentrations.

The RICE project is funded by EPA Research.

Since the mid-1980s, the Irish statutory authority charged with the responsibility to monitor radioactivity levels in the environment (first the Nuclear Energy Board, then the Radiological Protection Institute of Ireland and, since 2014, the EPA’s Office of Radiological Protection and Environmental Monitoring) have also conducted a marine monitoring programme to assess the levels of artificial radioactivity at a number of locations throughout Ireland. Environmental compartments subject to monitoring have included seawater, fish, shellfish, seaweed and sediments, with samples collected from the shoreline and coastal waters as well as from the open waters of the Irish Sea. The results of this monitoring, together with data from a number of research studies, have enabled the statutory authorities to assess the impact of artificial radionuclide sources to the Irish coastal environment, establish trends in radionuclide concentrations, determine realistic dose to critical groups and reassure the public at large.

Although a considerable body of data has been gathered on the distribution and behaviour of artificial radionuclides in the Irish coastal environment since the early 1980s, comparatively few data exist on the distribution and behaviour of natural radionuclides in Irish coastal waters. This RICE project aims to revisit a number of sites from previous surveys to provide an update on artificial radioactivity levels, which will supplement existing data, and to widen the scope of previous surveys to include the measurement of natural radioactivity levels. The will require the development and implementation of appropriate analytical techniques for the accurate determination of NORM (naturally occurring radioactive material) radionuclides. The methods developed will be applied to the characterisation and analysis of NORM materials in the context of dredging activities and the disposal of dredge material at sea.

The aims of the project are:

The project is of relevance to national priorities, as it will support and enhance the EPA's current environmental radioactivity programme, whose aims and objectives include (i) to comply with statutory and international obligations concerning environmental radioactivity monitoring (ii) to assess doses to individuals and the population from radionuclides in the environment; (iii) to study temporal and geographical trends of contaminating radionuclides to improve our understanding of the long-term behaviour of radionuclides; (iv) to ensure that any increases in radiation levels are detected and assessed rapidly; and (v) to support the Irish food and agricultural industry through the rigorous assessment of the levels of radionuclides in Irish foodstuffs. By establishing baseline levels of natural radionuclides and developing methodologies to enable the radiological assessment of activities involving NORM in the Irish coastal environment, the project will inform relevant stakeholders and policy makers, and will help in drawing up policies to meet the requirements of national and international legislation in the areas of NORM. 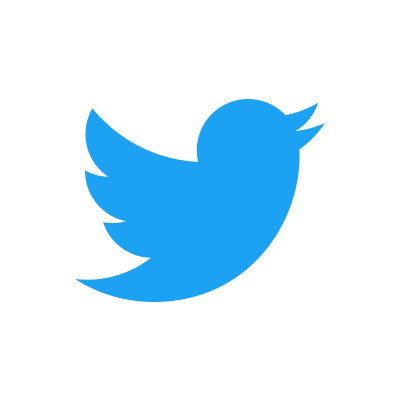 A review of the existing literature on radioactivity levels in the Irish coastal environment has been conducted and is being used to inform the sampling strategy for the project. As part of this review process, an existing comprehensive database previously compiled by one of the project team laboratories, covering the period up to 2005 has been updated with newly available data sourced from journal papers, monitoring reports from Irish and UK government agencies (EPA and MAFF) and PhD and MSc theses. The data has been exported into a format that allows the creation of interactive maps (via Google MyMaps service) showing historic sampling locations, providing information on the sampling date, sampling material (type and subspecies), radionuclides analysed, activity concentrations and the source of the information.

The information provided via these interactive maps has informed the sampling strategy, site selection and target species. The sample types selected will include species that are important from the viewpoint of ecosystem functioning, as well as those considered commercially important. The project team has selected Ascophyllum nodosum as the first target biomonitor species to establish a baseline of natural and artificial radioactivity. Although not as widely used in the past as other brown macroalgae (e.g., Fucus spp.), specimens of Ascophyllum nodosum of the same age can be sampled consistently to ensure inter-site comparability.

A reconnaissance sampling field trip recently took place to Finavarra, Co. Clare and Kinvara, Co. Galway. The objective of this preliminary fieldwork was to train team members in the identification of seaweed and on the sample protocols.

The project’s first sampling campaign took place in June – July 2021. Samples of seaweed (Ascophyllum nodosum) and marine sediment were taken from nineteen coastal locations. Ascophyllum nodosum had been sampled at fourteen coastal locations in previous surveys conducted by Irish and UK government agencies (EPA and MAFF) and as part of various research projects. The RICE project team revisited all locations with historical data and included five additional locations to give a greater geographical distribution around the Irish coastal environment. All Ascophyllum nodosum samples have been prepared and counted on a high resolution gamma spectrometer for both artificial and natural radionuclide content. Analysis and interpretation of the results by the project team is ongoing.

All marine sediment samples were frozen and will be processed at a later date. 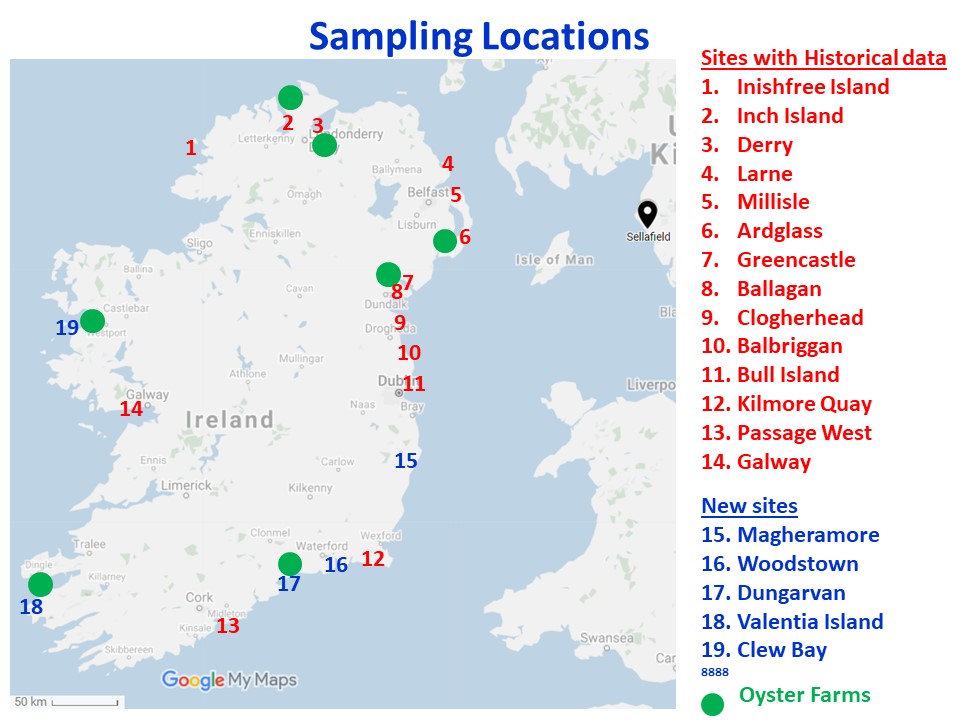 Sampling locations for the RICE project

In addition, oyster samples (Crassostrea gigas) were obtained from seven coastal locations. All oyster samples have been prepared and are currently being counted on a high resolution gamma spectrometer for both artificial and natural radionuclide content.  Subsamples of each have also been prepared and analysed on an alpha spectrometer system. Analysis and interpretation of the results by the project team is ongoing.

The next phase of the project will involve processing of the marine sediment samples and further analysis and interpretation of all results from this first sampling campaign. In parallel with this, the project team are developing methods to determine the radionuclide content from natural radionuclides; this involves modelling of the gamma ray detectors and determination of a variety of correction factors. A second sampling campaign is scheduled to take place in June-July 2022.

The Sample Types (opens in new window) interactive map displays all sites where samples have been previously collected and analysed for radionuclide content. A drop-down menu can be used to select the sample type/sub-type which includes crustaceans, fish, marine algae, marine sediment, seawater and dredge materials. The sample sub-types are colour-coded for easy identification. A particular sampling site can then be selected, revealing the information associated with that specific site.

The Marine Algae (opens in new window) interactive map displays all sites where various species of marine algae have been previously sampled and analysed for radionuclide content. A drop-down menu can be used to select the marine algae sub-type which includes Ascophyllum nodosum, Laminaria digitata, Fucus serratus and Fucus vesiculosus. The marine algae sub-types are colour-coded for easy identification. A particular sampling site can then be selected, revealing the information associated with that specific site.

The interactive maps generated have allowed the project team to interrogate the available information in order to establish the geographical extent of previous surveys, the most common materials and radionuclides analysed, as well as the sites with the greatest sampling frequency. Based on the geographical availability and biological characteristics, the project team has selected Ascophyllum nodosum (a well-established biomonitor of radionuclides in the marine environment) as the first target species, as this will allow comparison with previously published and unpublished data on radionuclide content. This Ascophyllum nodosum interactive map (opens in new window) displays all sites where this species has been previously sampled and analysed for radionuclide content; the project team plan to revisit all previous locations and some additional locations will be included to give a greater geographical distribution around the Irish coastal environment.

A reconnaissance field trip to Finavarra, Co. Clare and Kinvara, Co. Galway took place on 15th March 2021. Samples of Ascophyllum nodosum, Laminaria digitata and Fucus serratus were collected and are currently being analysed at the EPA’s radioanalytical laboratory. These samples will be analysed for artificial and natural radionuclide content using high-resolution gamma spectrometry. The results of these analyses will provide a good indication of the levels of natural radioactivity to be expected from this type of samples and will inform the sampling strategy (amount of material to be collected, treatment, preparation, etc.).

As the COVID-19 restrictions ease, the project team will next undertake a field trip on the east coast which will allow differences between the prevalence of different species on the east and west coasts to be identified. This will be followed by a more extensive campaign targeting all identified sites for Ascophyllum nodosum sampling. At each location, coastal sediments will also be collected for analysis. Separately, the collection of oyster and fish samples from representative aquaculture sites will also take place.