The CEO-in-Residence (Chief Executive Officer-in-residence) initiative represents a novel and innovative expansion of the resources of the School by formally appointing a nationally renowned business leader to assist in enhancing the interaction between business and the Schools’ students, staff and community. The CEO gives of his/her time to agreed activities of the School for a number of years.  Their sustained involvement provides depth to the nature of the engagement normally possible with senior business people.  The CEO-in-Residence represents time given pro bono by the executive to benefit the next generation of business leaders.

The CEO-in-Residence Programme was initiated by us to further integrate senior practitioner perspectives into our learning environment on a more sustained basis.  At its core, the challenge of the role is to foster and release the potential of future entrepreneurs, managers and business specialists in the region – as we know, the region critically relies on the generation of these valuable resources in order for it to grow and blossom. This is achieved through meeting with staff and students of the School and engaging with them in a number of activities, including business discussions, lectures, research and master classes over the two year period.

Former appointees to this role have included Mr. Sam McCauley, Chairman of Sam McCauley Group and Mr. Pierce Casey, Managing Director, Adelaide Capital who through their interactions provided tremendous learning, development and networking opportunities for our students. In addition, the CEO-in-Residence also provides an important advisory role supporting the valuable work of the School and informing our research and programme development activities.

The initiative provides new and innovative ways for learners to develop valuable skills and business knowledge that reading and lectures alone cannot meet. Equally the programme recognises the important input that business practitioners can bring to academia, a world where theory and practice interact to develop the minds and skills of the learners of today and the business leaders of tomorrow. 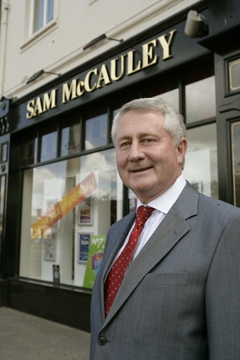 The McCauley Chemist Group (www.sammccauley.com) was initially established in 1953 by Sam McCauley’s father and has grown from an initial single store to a group with 24 outlets nationwide, employing over 650 staff. The largest Irish-owned pharmacy chain in the country, it is ranked in the top 500 companies in Ireland, and has recently been awarded the Deloitte Best Managed Companies Award, 2009.

Group turnover exceeds €90 million and this has grown considerably in recent years. Sam joined the business in 1978 and has been the catalyst for the expansion. He remains the main shareholder in the group and now serves as Chairman, having appointed Patrick McCormack as Chief Executive in recent years. The company converted to a PLC structure in 2002, with senior management and store managers given the opportunity to buy into the business.

Remarking on his role as our first CEO-in-Residence, Mr McCauley stated that ‘The CEO-in-Residence role reflects my own thinking on the importance of mentors and role models, not alone in business, but in life. Consciously and subconsciously, we inherit standards and behaviour from our peers and from political, religious and community leaders, for better or worse.

There is little doubt in my mind, however, that educators have the greatest influence in shaping and mentoring our future generations. Indeed, most independent commentators identify the fact that it was the educational system in Ireland that sowed the seeds of the Celtic Tiger, and that our greatest resource in attracting foreign direct investment and in generating an entrepreneurial culture in Ireland was our young well-educated workforce, with the confidence, communication skills and ability to challenge the best in the world.’ 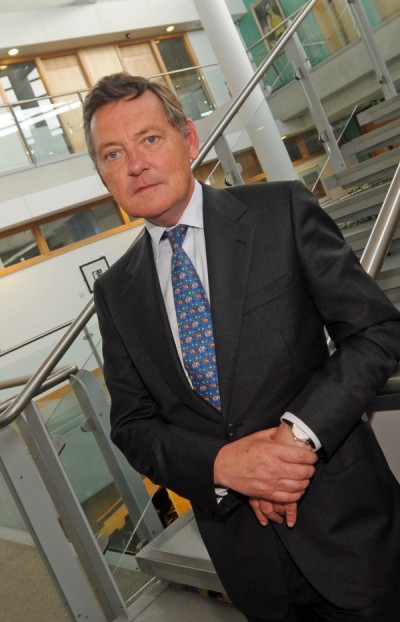 Pierce Casey chairs his own investment office through Adelaide Capital Ltd and is a director of several investee companies in Ireland, the UK and continental Europe. Founding chairman of several successful businesses in Ireland, his career has combined the roles of entrepreneur and institutional private equity director and he is a past director of DCC (London) and leading private equity houses Apax Partners & Co (1997-2001) and Alchemy Venture Partners Ltd (2001-2007).

He has been involved in numerous major buyouts in Ireland, the UK and continental Europe.  A number of companies he established subsequently floated in London and Frankfurt (Fayrewood plc, ComputerLinks AG and Imprint plc). Non-executive chairman of Arden Capital Ltd, Mr Casey qualified as a chartered accountant with what is now PricewaterhouseCoopers (PwC) before spending over six years working with DCC.