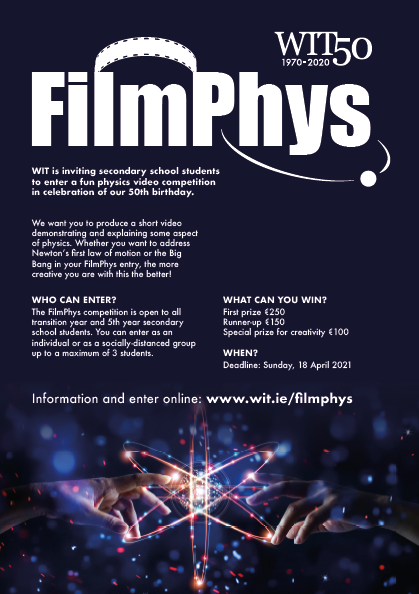 SETU Waterford is celebrating its 50th birthday this year and as part of the festivities we are inviting secondary school students to enter a fun physics video competition. We want you to produce a short (less than 3 minutes) video demonstrating and explaining some aspect of physics. Whether you want to address Newton’s first law of motion or the Big Bang in your FilmPhys entry, the more creative you are with this the better.

The FilmPhys competition is open to all transition year and 5th year secondary school students. You can enter as an individual or as a socially-distanced group up to a maximum of 3 students.

What can you win?

The deadline for submissions is midnight on Sunday, 18th April 2021.

You simply need to produce a video which either

We’d like you to be as creative as you can with this – music, song, rap, poetry, graphics etc. – whatever you’d like to include to aid your explanation, GO FOR IT!

The video should be

Multiple entries from the same person/team are permitted.

The winner of the overall competition is Aisling O'Brien, a transition year student from St Mary's Secondary School, New Ross, Co Wexford. Aisling's video is titled "The Doppler Effect". The Doppler effect is observed as a change in pitch whenever a source of sound travels relative to the observer. In her video, Aisling used her father driving along the road sounding the car horn to ably demonstrate the effect. The judges were impressed with the video's "fantastic graphics, excellent demonstration of the Doppler Effect and great presentation." On being informed of her win, Aisling said that she was "absolutely delighted to have won the competition". She will receive a cash prize of €250 and a certificate of achievement.

The Creativity Award is a special prize awarded to the entry displaying the most creative approach to their chosen topic. The winner of the Creativity Award is Bianca Gouws, a transition year student at Presentation Secondary School, Clonmel, Co Tipperary. Her video, which is called "Quantum Cat", is an animation that takes a sideways look at the bizarre world of Quantum Mechanics. The judges praised the video for the animation, the inventiveness of the presentation and the novelty of the topic; all delivered with an understated humour. Bianca will receive €100 along with a certificate of achievement.

The runner-up prize goes to Liam Kelly, a 5th year student at Waterpark College, Waterford City. In his video, Liam looked at the interplay between different types of energy using a mousetrap car which he created using a 3D printer. The judges lauded Liam's video for "the quality of the presentation, the clarity of the explanation and the care with which the video was put together". Liam receives a cash prize of €150 and a certificate of achievement.